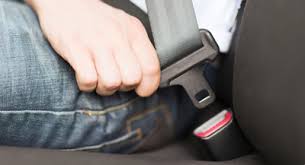 We’ve heard the excuses. They wrinkle my clothes. It doesn’t fit me right. If my car is on fire after a crash I don’t want to be trapped in a seat belt. I wasn’t traveling that far. Troopers that have worked the road for even a short period of time can easily recount having heard these and similar excuses for not wearing a seat belt. The truth is, there are no excuses.

Within the last week Indiana State Police troopers have investigated two crashes, one in Marion County with five people that were ejected after a rollover crash and another crash in Knox County where two people were ejected.  In both of these crashes indications are seat belts were not being used.

According to America’s Health Rankings United Health Foundation, motor vehicle crashes are the leading cause of death for children and adults aged 1 to 54 years in the United States. A total of 21,022 drivers and passengers died in 2014 the result of motor vehicle crashes and more than 2.3 million people were injured and treated in emergency departments. Over half of teens and adults who died in crashes in 2014 were not wearing their seat belts at the time of the crash. Wearing a seat belt is the most effective way to prevent deaths and injuries in car crashes, helping to reduce injuries and deaths by approximately 50%.

In June 2015, the Indiana Criminal Justice Institute Law Enforcement Liaison conducted an observational seat belt survey to determine usage rates for drivers and passengers of all vehicles. Historically, seat belt usage rates of pickup truck occupants has been lower than cars; therefore, one of the ICJI’s primary focuses was targeting this class of occupants. Survey results found pickup truck occupant usage rates for 2015 at 83.1 percent, which is significantly lower than that of cars, which was 94.8 percent. However, truck seat belt usage rates increased 4 percent from 2014 to 2015.  This indicates efforts to increase truck sea tbelt usage rates have had a positive effect.

Indiana law requires all passengers in a moving vehicle be restrained in a seatbelt or child restraint system while the vehicle is in forward motion. Law enforcement can make a traffic stop if you are observed operating a motor vehicle in violation of this law.

Please buckle-up every time, for every trip, long or short.

“Seat belt usage is one of the simplest ways to enhance your safety and reduce injuries in the event of a crash” said Indiana State Police Superintendent Doug Carter. “Trooper’s will aggressively enforce seat belt usage to advance voluntary compliance and ensure the safety of Hoosier families.”

Salem Man Arrested After Hiding In Home For Over 5 Hours